I decided to build (for the first time!) a desktop PC instead of getting another laptop, for a few reasons:

So here’s how my first PC build went.

As you might guess from my website’s favicon, and my all-around Stack More Layers demeanor, I started with the GPU.

I wanted a not-too-expensive GPU that I could use both for gaming and for training reasonably large neural nets. (I do have access to lots of powerful GPUs in the Mila cluster, but it’s nice not to have to share with other people sometimes, and to be able to leave a model training for, like, a month.)

The best option looked to be the Nvidia (nVidia? NVIDIA?) RTX 3080. But whether due to pandemic disruptions, or Bitcoin bros, or BERT bros, or something else, it’s off shelves everywhere.

I waited a month to see if the RTX 3080 would come back in stock anywhere, but no luck. Instead, I consulted Tim Dettmers’s magisterial deep learning GPU guide and found that, among not-unavailable GPUs, the GTX 1080 Ti had the best performance per dollar, and good performance for training transformer models. So I picked one up from a guy nearby in Montreal off Kijiji. 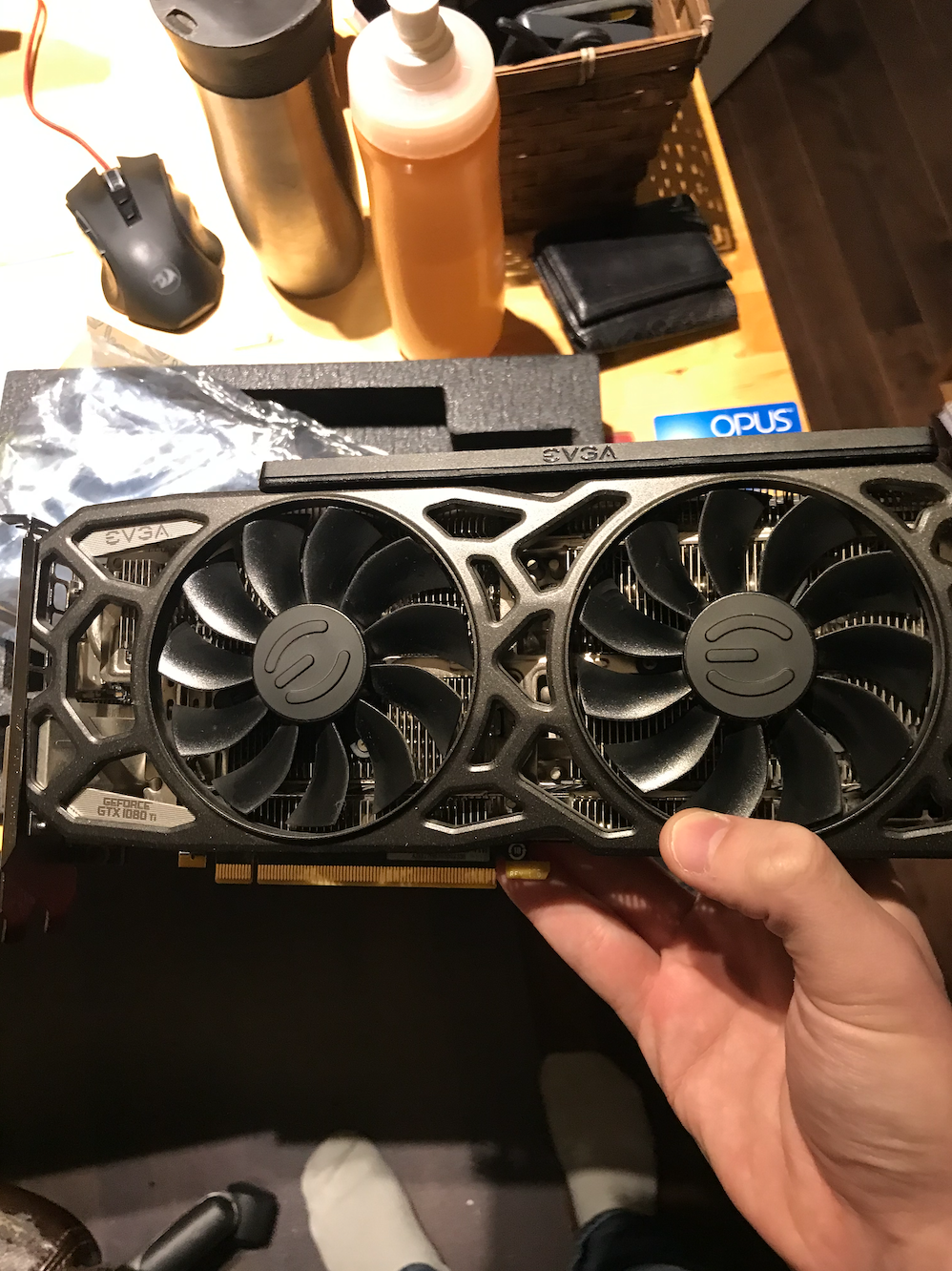 Using PCPartPicker’s Completed Builds search feature, I found a build for a PC based around the RTX 3080 and followed it to the letter. I probably could have optimized the components more for what I want, but having not ever built a PC before, I didn’t want to accidentally select components that were incompatible with each other. (PCPartPicker does have a compatibility checker, but I don’t know how idiot-proof it is.)

Then I bought all the components, put it together, and breathed a sigh of relief when I pushed the power button for the first time and the fans turned on.

The build process felt like assembling a LEGO (Lego?) set, but with the instructions distributed across multiple boxes and the additional stress of unfamiliar sensitive electronic components that would cost a lot of money to replace. 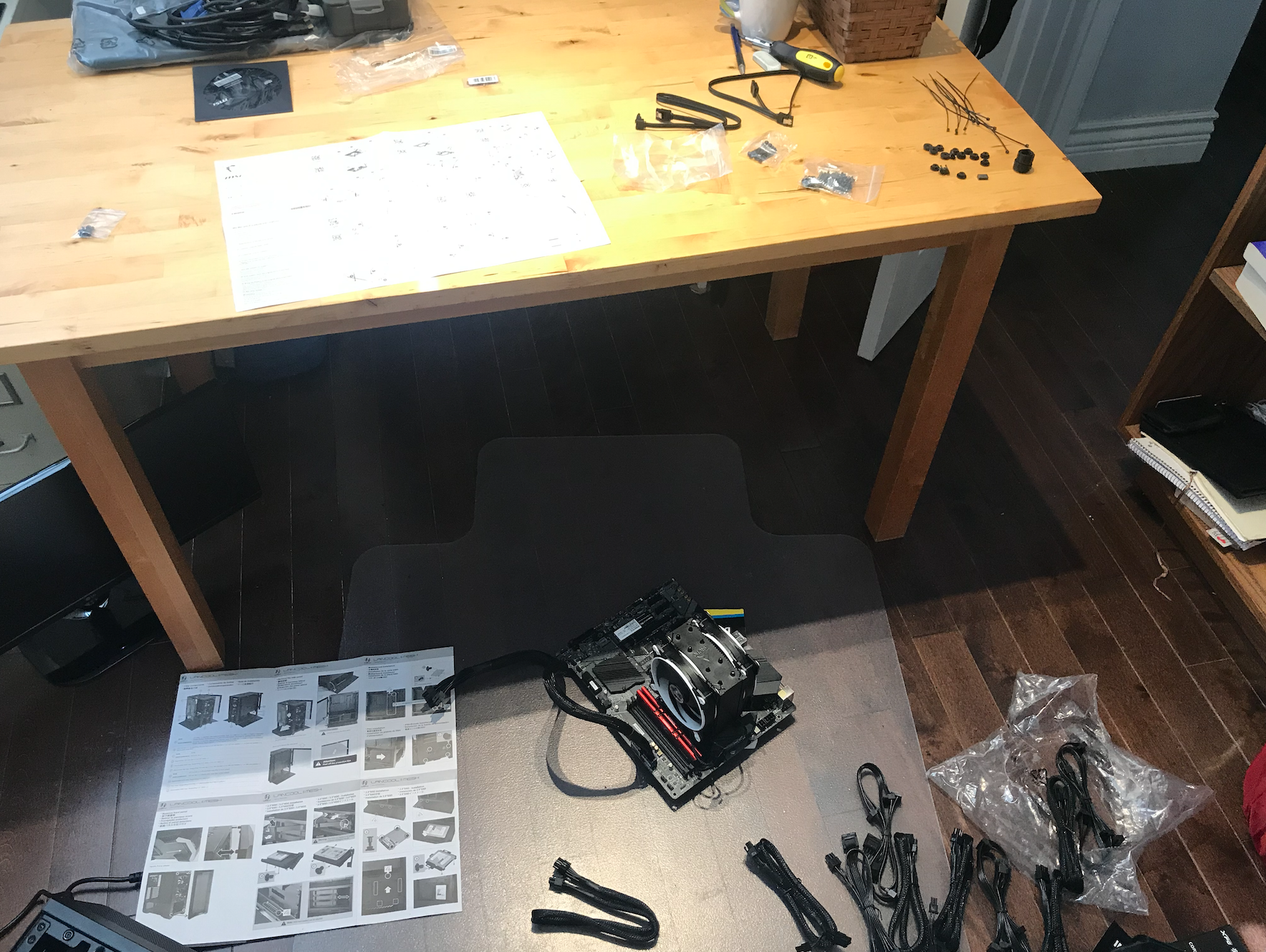 I started by reading the motherboard manual, which told me to put in the CPU. That was a little nerve-wracking because I really had to pull the little whammy bar (or so I’m inclined to call it) tight to get the chip in, which felt wrong. 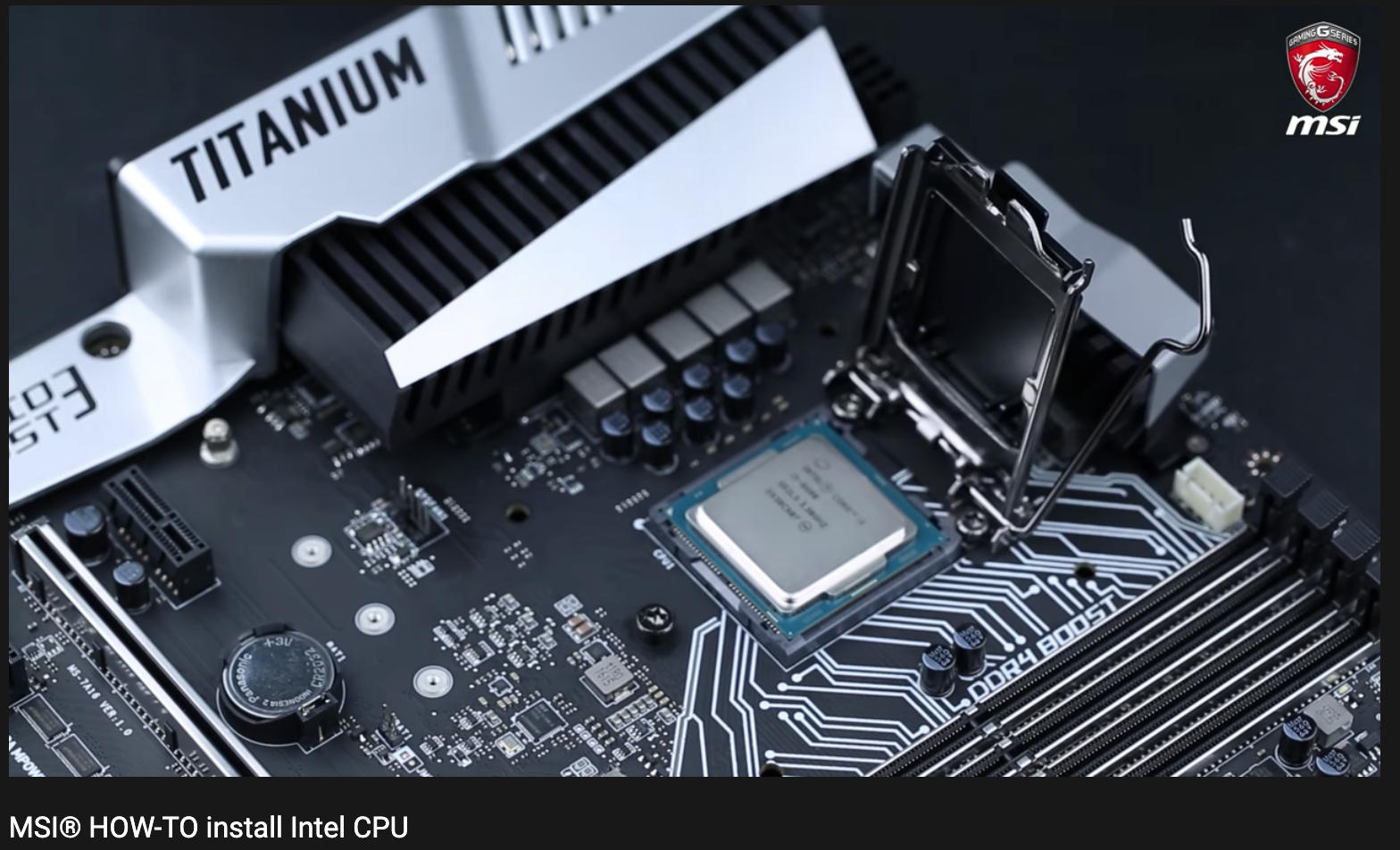 Then I installed the fan, with the help of a video guide. I wasn’t even sure what the orientation of the fan within the case was supposed to be, so I tried to infer it from a photo taken by the creator of the build. Because I hadn’t put the motherboard into the case yet and had to operate solely on other landmarks, this was mystifying, until I realized that the photo showed a machine with glowy RAM sticks instead of the non-glowy RAM I had. Thus I learned that people use RAM that glows. 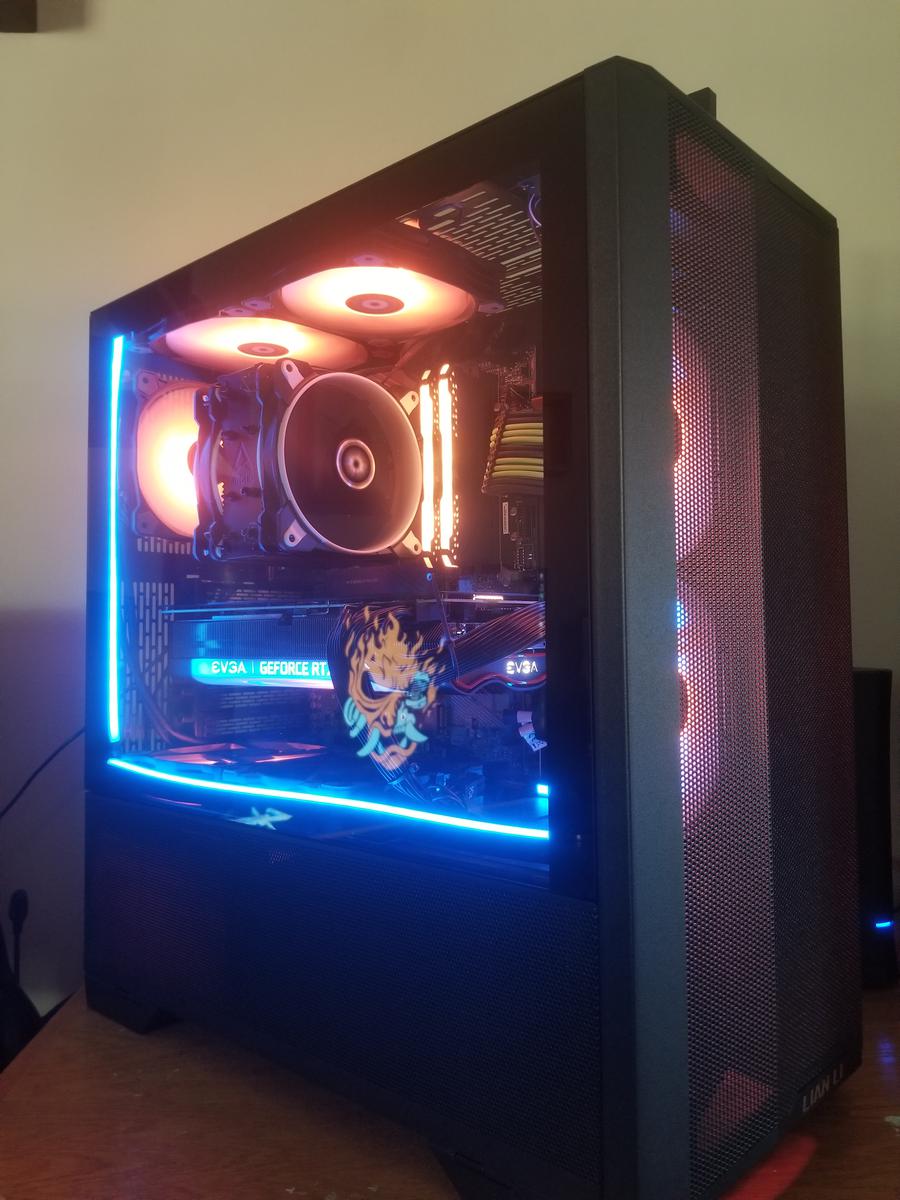 The PC case itself was a complex enough beast that I had to follow yet another (thorough, excellent) video guide on how to get it open and wire things up to the motherboard. 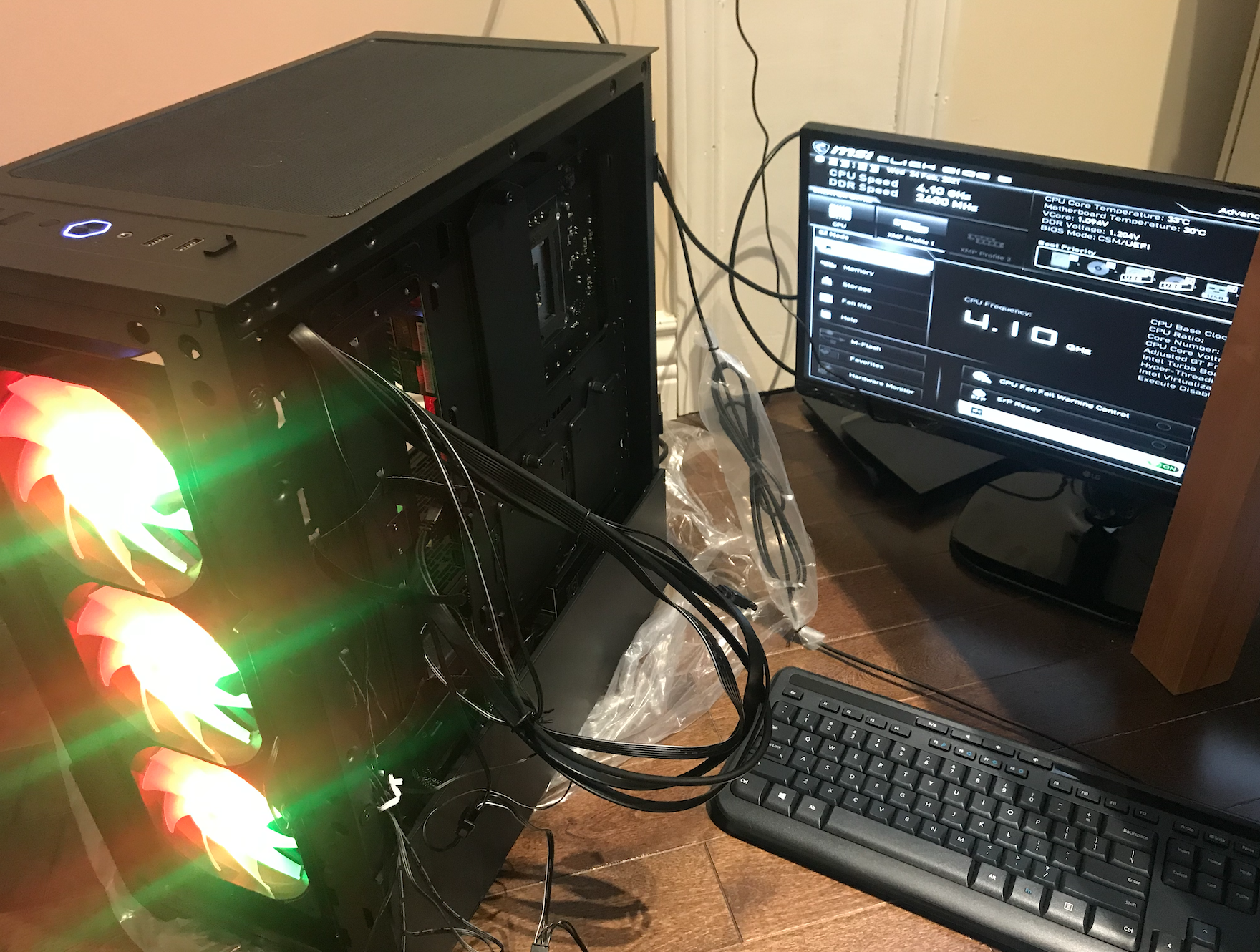 It’s alive! And it glows. But the RGB effects are a little distracting, so I’ll probably deactivate them. Besides, I don’t need them to feel like a real Gamer. As it is written: “When you Game, do not be like the hypocrites, for they love to be seen as Gamers with their showy RGB effects. Instead, when you Game, go into your room, close the door, and Game in secret.”

The build I followed did not include any peripheral devices, so I picked some up, again using PCPartPicker. I’ve never been picky about keyboards, so I just filtered for low prices, sorted by rating, and picked the top one. Same for the monitor. For the mouse, I bought this nice glowy one with some sort of fangly beast on it. More RGB! 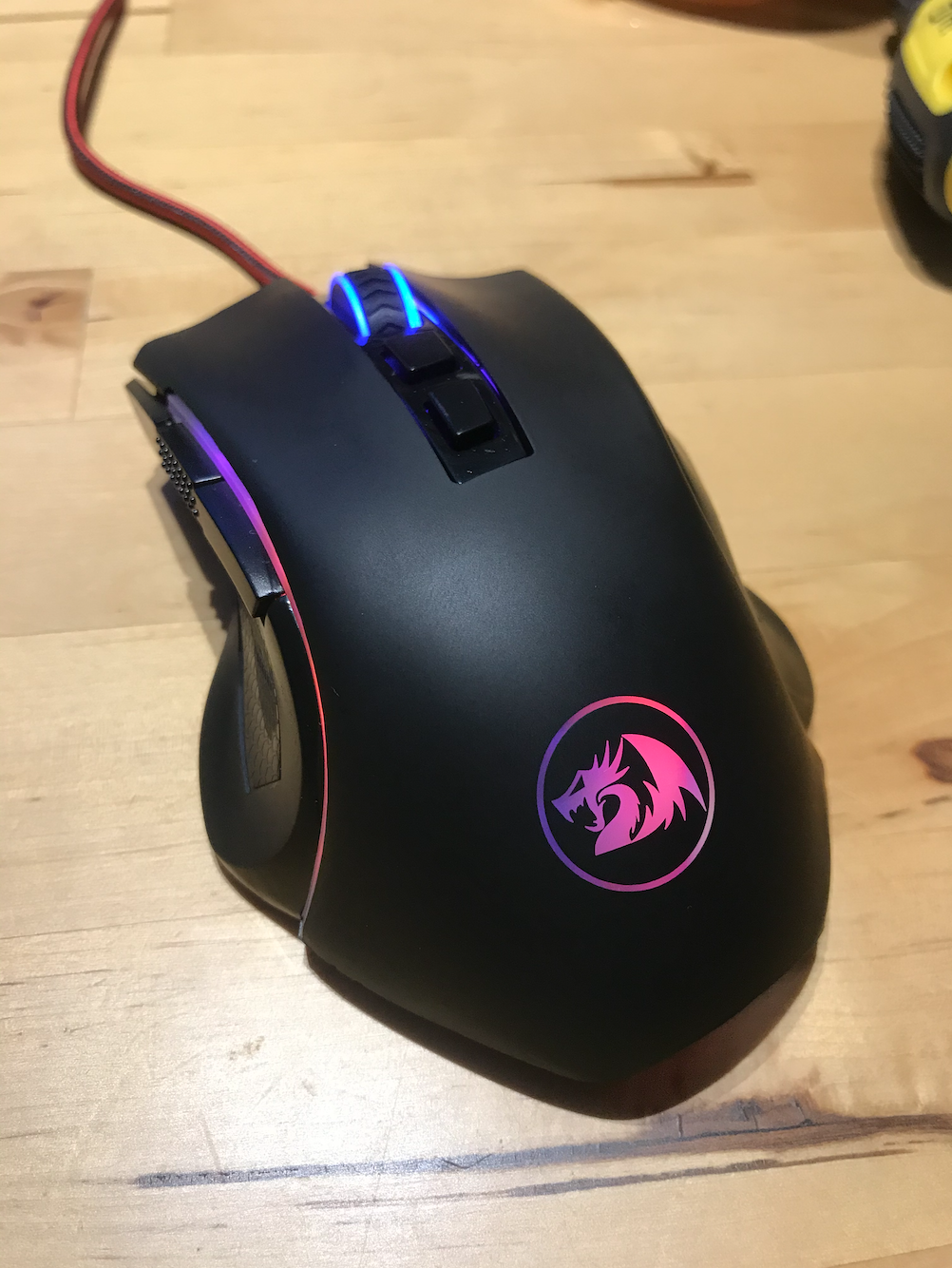 Also, apparently, motherboards cannot connect to the Internet without help! As I discovered when I turned on the PC. (Stop laughing!) I don’t have an easily-reachable Ethernet cable, so I had to wait a couple days more for a Wi-Fi PCIe card to arrive before I could actually use the computer.

Incidentally, the package for the Wi-Fi card featured maybe my favorite acronym ever: 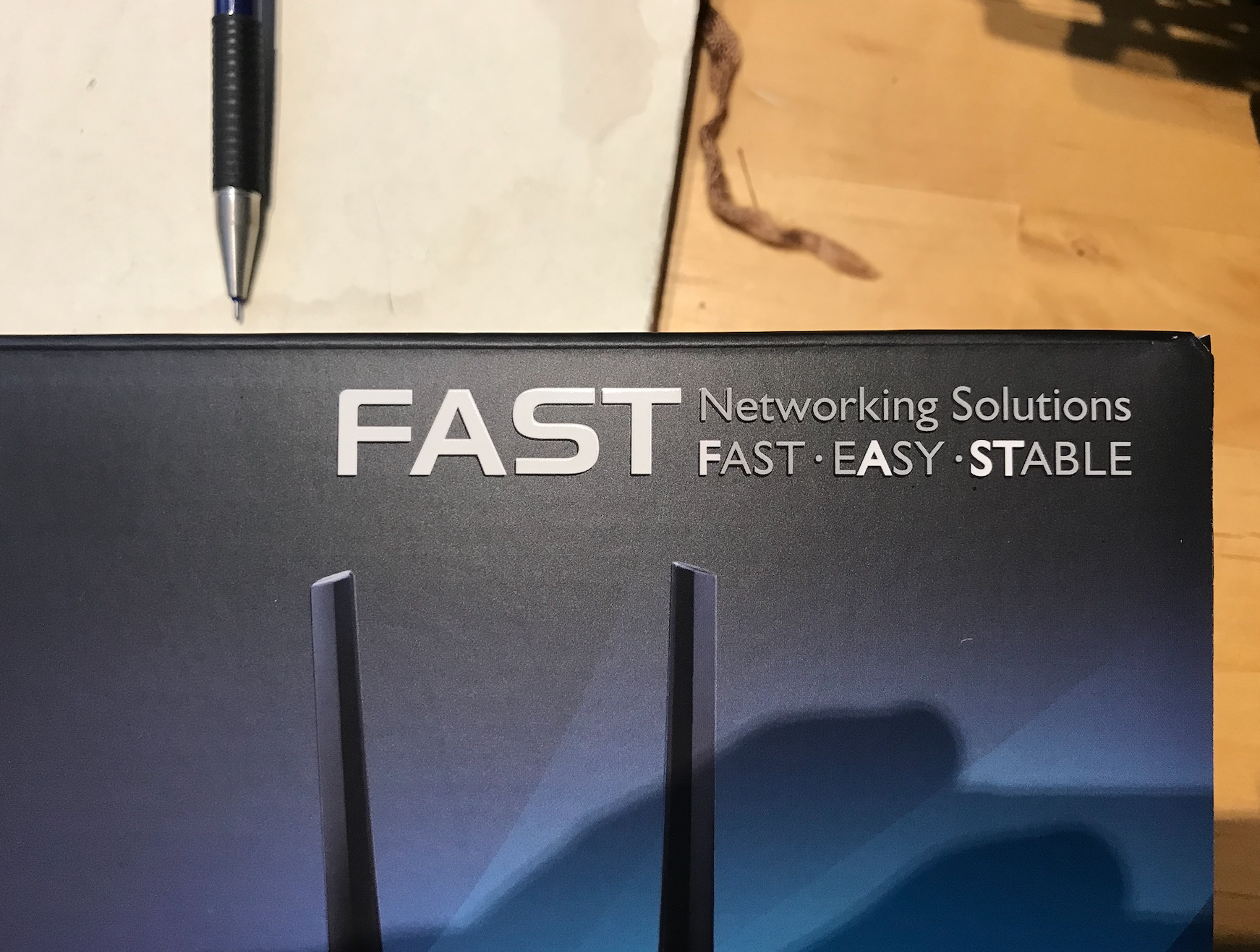 For my first game, I picked up Star Wars: Squadrons, the recently released spiritual successor to the old Rogue Squadron series of dogfighting games. I’m bad at it. But it’s fun! And it runs great on my new machine. It’s very pretty, but I haven’t looked up how to do a screenshot yet, so here’s a picture swiped from the Wikipedia article on the game. 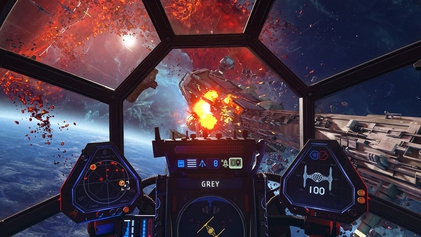 I also downloaded the original Half-Life, a game I bought on Steam a while back that my MacBook rudely made unplayable with the Catalina macOS update.

Yay! Almost done. The last step for me is getting Linux dual-booted so that I can use all my machine learning tools.