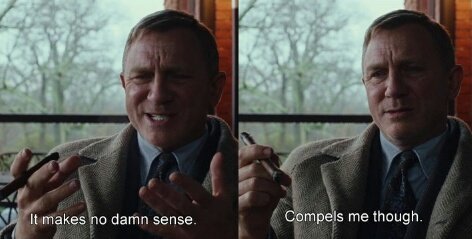 The gist of the book is that something called “Spirit” (“Geist”) develops from simple consciousness of the “Here and Now”, to abstract concepts, to knowledge of self and the social/ethical world, to more sophisticated forms of art, science, religion, and finally Absolute Knowledge. Along the way, Spirit invents big world-historical things like Stoicism, Skepticism, Christianity, and Kant. (See the German audiobook cover below, which incidentally cracks me up because it looks like something from a cult.) 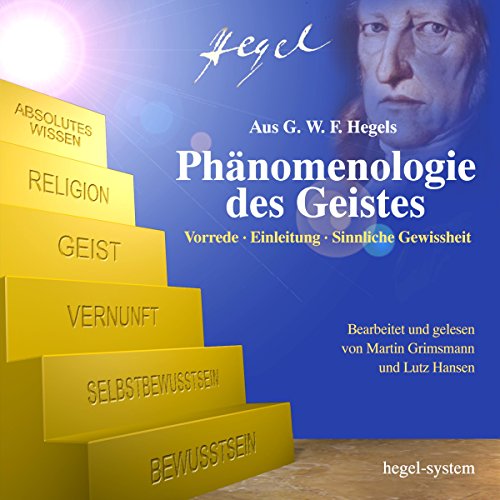 For me, as for other people, the most fruitful way to get through the book turned out to be not to try following the logic (if it exists!) of the text from section to section, but rather to sit back and enjoy the stream-of-consciousness of an extremely erudite man, who occasionally drops an interesting phrase or formulation that people like Marx and Sartre later picked up.1

Still, there was one aspect of the Phenomenology of Spirit that defied my stream-of-consciousness-style reading and gave me pause: namely, the way in which Hegel defines the word “Reason” (“Vernunft”).

Here are a few selections from the beginning of the “Reason” section of the book:

[Self-consciousness as Reason] is certain that it is itself reality, or that everything actual is none other than itself… [Sec. 232, p. 139]

Reason is the certainty of consciousness that it is all reality; thus does idealism express its Notion. [Sec. 233, p. 140]

Reason, as it immediately comes before us as the certainty of consciousness that is is all reality, … [Sec. 242, p. 146]

This is an odd definition for “Reason”. It sounds more like a definition of “idealism”. I think most philosophers, or AI people like me, would instead define “Reason” as “producing (or the faculty of producing) valid new assertions given other assertions”, or something like that. But Hegel is definitely very keen on his own unusual definition, as he makes a point of saying it at least four times.

Yet Hegel’s definition doesn’t seem that useful or fitting even in his own book. Take, for example, this description of what Reason does:

Reason sets to work to know the truth, to find in the form of a Notion that which, for ‘meaning’ and ‘perceiving’, is a Thing; i.e. it seeks to possess in thinghood the consciousness only of itself. [Sec. 240, p. 145]

Plugging in “the certainty of consciousness that it is all reality” for “Reason” does not really seem to work here:

Or here, in which Hegel starts to take one of his many potshots at “sound common sense”:

Since self-consciousness knows itself to be a moment of the being-for-self of this substance, it expresses the existence of the law within itself as follows: sound Reason knows immediately what is right and good. [Sec. 422, p. 253]

sound [certainty of consciousness that it is all reality] knows immediately what is right and good (?)

One possibility is that Hegel is not actually using “the certainty of consciousness that it is all reality” as a definition of “Reason”. Instead, maybe he just wants to firmly establish the notion that “consciousness is all reality”, and this advanced stage of the development of Spirit in his book seemed like a good place to do it. We know what Reason is; so instead of wasting the reader’s time giving a “definition” they already have, why not use the gap where a definition would normally go as a free space to stick an idea he wants to make sure we share with him? Hegel seems to pull many such tricks in this book.

A third possibility is that “Vernunft” has overtones in German that “Reason” does not have in English and that could make Hegel’s odd usage more sensible. This is at least true of “Geist” (cognate with English “ghost”), which we could translate in English as “Spirit” (as is done for Hegel), “Mind”, or maybe “intellectual activity” (“humanities” in German is “Geisteswissenschaften”, in contrast to “Naturwissenschaften”, “natural science”). My German isn’t good enough for me to know whether something similar can be said of “Vernunft”.

(A fourth possibility is that Hegel is full of shit and we should just put the book down. In math, this is called “the trivial solution”.)

It’s also interesting to look at how Hegel uses “Reason” (“Vernunft”) in some of his later writings. In the preface2 to his 1820 Philosophy of Right Hegel attributes an idea about Reality and Reason to Plato:

Yet [Plato] has proved himself to be a great mind because the very principle and central distinguishing feature of his idea is the pivot upon which the world-wide revolution then in process turned: What is rational is real; And what is real is rational. (Was vernünftig ist, das ist wirklich; und was wirklich ist, das ist vernünftig.)

Another famous instance is his phrase “the Cunning of Reason” (“die List der Vernunft”) in his Lectures on the Philosophy of History. The idea is that individual humans who think they are simply acting in their own self-interest, with no regard for whatever shenanigans Spirit is trying to pull with world history at the moment, are, by being rational, unwittingly carrying out what Reason wants to have happen in the world:

The particular interest linked to passion is thus inseparable from the actualization of the universal principle; for the universal is the outcome of the particular and determinate, and from its negation. … This may be called the Cunning of Reason, that it allows the passions to work for it, while what it brings into existence suffers loss and injury.

Reason as logic; Reason as idealism; Reason as Spirit moving history forward by tricking us rational peasants into doing what it wants. Is there some simple notion underlying these conceptions for Hegel? You’d probably have to get a philosophy degree to prove it. As a programmer, polysemy frustrates me. As a poet, it fascinates me.